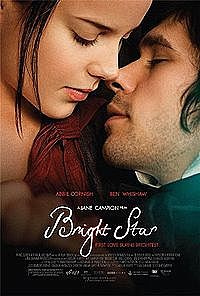 “Bright Star” is that rare combination: a film beautiful, brave, magical and idyllic, without being saccharine. The story of John Keats’ all too brief love affair with the girl next door, Fanny Brawne, moves at a pace organic, like a soft breeze across the heath, following the young lovers, sometimes pushing them gently on, but never overwhelming them to fit some static formula. The pace of the film never overwhelms the story, the actors, the scenery or the music of their romance, though there is plenty of darkness inside the light. Ominous signs converge with the Romantic setting, without commentary, without a filmmaker’s agenda.

Abbie Cornish plays Fanny Brawne, and she is dressed to suit the time and somewhat hide her very modern, nearly uncontainable wry sensuality. Her somber smile and her understated performance act to cool the natural warm force of her being, but not enough to make it by any means difficult to see why Keats would fall madly in love with her.

They are wonderful together, in scene after scene. Keats (played by Ben Whishaw), so close to death, though he did not know it, discovers in the flesh what his mind had sensed and his poetry had expressed. He teaches Fanny how to read poetry, and helps her discover literature, art and a far wider world than she had been exposed to prior to their meeting. And she teaches him how to live and love, how to go beyond the words on the page into the suitcase of concrete life.

Aside from the tragic circumstances of his health, Keats was also impoverished, from a poor family, orphaned at a young age — the very notion of the Romantic Poet we think of to this day. Campion touches upon all of that, but shows us the doomed lovers together, instead of dwelling upon the impossibility of their situation. She uses letters and poetry throughout to bring Fanny and Keats closer together, even when they’re far apart.

And it made me think of so many things, of so many what-could-have-beens. Keats died at the age of 25, when he was just coming into his full power as a poet and had only been writing his works of genius for a few years. His poverty, his lack of access to the best venues of education in the England of his day, makes the brilliance of his poetry all the more stunning, and it was perhaps one of the chief reasons why he wasn’t accepted by the Establishment until much later. Class and “breeding”, snobbery and bigotry, kept him out of the halls of fame while he lived, and it would take a couple of decades before he finally had his due.

A poet must live before he or she can actually write. And living takes us away from writing. While we write, in a sense, in a physical and experiential sense, we don’t live, unless the act itself of writing soars us, provokes us, sends us into new worlds. And it can. It can and often does just that. But it’s never enough. It’s never enough to just live inside words, no matter how beautiful they may be. Those words must always be tied to something concrete and alive, not just essences or imagined things. They must be informed by and based upon the natural world and life within that world. The waves, the wind, the night, the mountain peaks.

And there is nothing so intensely, lyrically alive as a person who loves. Nothing comes close to that, to that in-the-moment feeling of being at one with another person. Close by, is the love for Nature. And the most beautiful synergy, the most perfect union, is to love someone in the context of Nature, not outside it, but within it, resting organically within the womb of Her World.

William Barrett believed that Wordsworth was perhaps the last poet to live naturally in Nature. He thought Wordsworth was the last Natural Man in a sense. I think Keats would have fit that as well, if he had been blessed with a different kind of health, a different kind of financial situation, a life on an English farm, perhaps, with Fanny by his side, growing gratefully old together in time.