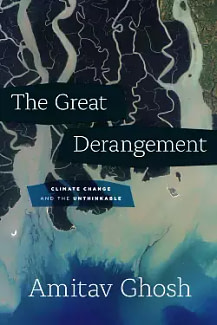 The frightening thing about this important book from 2016 is that its, at times, terribly dire assessment of our environmental trajectory seems positively sunny in comparison with 2022’s outlook. As in, despite its warnings and vivid depictions of Mother Nature as of 2016 and beyond, She has gotten a good deal angrier since then. And this time-shock has been my experience reading various books on Climate Change in the last few years. As dire as they appear when they first come out, events soon overtake them and paint a more worrisome picture soon after. This is accelerating almost daily now.

Elizabeth Kolbert’s excellent The Sixth Extinction, for instance, from 2014, now seems too optimistic in its general hopes for timely realizations, as does Naomi Klein’s On Fire, from 2019, and The Uninhabitable Earth, by David Wallace-Wells, also from 2019. At the time of their publication, they were thought of by many as on the cutting edge of sounding the climate alarm. But in early 2022, they already strike me as — through no fault of their own — not freaking out nearly enough.

What sets Ghosh’s book apart, however, is its focus on the literary arts, which makes sense given his status as one of Asia’s preeminent novelists. His thesis, going in, is that far too few writers have taken up the challenge of dealing with Climate Change as an issue worthy of the novel’s form, and those who have tried, haven’t been taken seriously. This, I think, has also change since 2016, perhaps spurred on as well by the pandemic. I’ve bumped into several novels recently that merged the two, with Alexandra Kleeman’s Something New Under the Sun, and Joy Williams’ Harrow, perhaps standing out the most.

Ghosh does an excellent job in making the case for why there was such a lack at the time of his book, and connects all kinds of dots to move beyond the cultural sphere and into the scientific, economic, and political. The book is also important for its point of view. While international in scope, and rightfully acknowledging that it will take the entire world to solve this, he focuses primarily on Asia — which is often strangely excluded from such conversations in the West.

I found the book to be very accessible, never bogged down in jargon, and well put together. It also ends on a somewhat hopeful note, as many of the other books on Climate do. The best, however, do not engage in the proverbial blowing smoke, etc. This doesn’t. It’s brutally honest, treats its readers as adults, says what hasn’t worked in the past, won’t work in the future, and what very well might. That’s the way to enlighten and spur folks on to get things done, together.