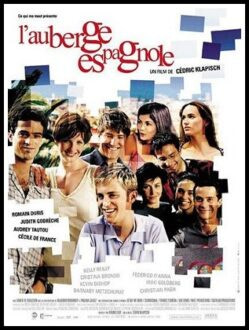 Recently watched two films by the French director, Cédric Klapisch. ‘L’Auberge Espagnole’ and ‘The Russian Dolls’, the latter being the sequel. They tell the story of a young writer, Xavier, his year in Barcelona, and subsequent relationships growing out of that year, primarily back in France. I enjoyed them both, but liked the first one better. Nothing deep, but an interesting salad of nationalities, quirks, and eccentricities, mixed together and presented with a touch of French seasoning that reminded me a lot of ‘Amelie’. Klapisch uses the camera well, uses modern techniques to splice and dice the story, shift perspectives, speed up and slow down time, distance, longing. He knows how to employ beautiful women to good effect, like Audrey Tautou, Judith Godrèche, and Cécile De France, among others. But, most importantly, he realizes the necessity of getting the audience to like the characters, despite their flaws, care about them, want to follow them on their crazy misadventures. And I did.

Now, I’m a big fan of angst, art born of tragedy, deep, dark depths and so forth. But sometimes you just want to see lite fare, intelligently done, acted, conveyed. Sometimes the world is far too real, and you want to escape into a land of energetic lives and loves, of crazy situations, beautiful faces, locales, and lots of hope for the future. These two French comedies definitely fit the bill.