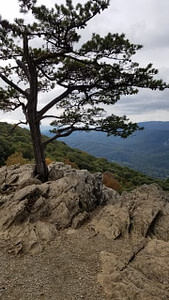 I go to my spot. It’s my spot though it’s everyone’s. It’s everyone’s though it’s really just mine. Because I say so. Because I believe the rocks, the trees, the birds, the clouds all speak for me. They are my eyes and ears and voice. Voices. Plural times plural. So close to infinity, but not quite.

Again, because that is my thinking and I don’t really want to take the easy way out.
The easy way out would be to let go of time and just claim the infinite, always, everywhere

Which really means no time and nowhere. Or does it? It could. It really could, but then
The amber rocks, the powder blue skies, the stunted, evergreen tree at the heart of things
Would disappear, and they rebel against that. They rebel against my ideas.

So an alternative arrives. Think music. Think contra-sounds. Instead of the mountain’s wind, the flow between the rocks and trees, the beating core of the mountain itself, I listen to Dylan. I listen to the first modern troubadour to win the Nobel Prize for Literature, and I listen to old music, music that has the weight of folk culture and icons on its back.

Songs that are so familiar, we don’t even remember who wrote them. Like an oral tradition before Homer, sampled by Homer and the bards who followed him.

Decades before he left Minnesota for New York, we would have called them standards — or something like that. But after Dylan we just call them songs without origins, iconic, archetypal, leading to studies we might then call seminal, classic.

And this merges with the mountain, because it can’t. It really can’t possibly do this but it does. I see the amber rocks in a different way, with the notes and lyrics hovering over it like gray clouds, spots of sunshine, flashes of light. Its calm is shattered or augmented or aligned with ancient songs written a few decades past, when the world was young, when America was young, breathless, hope-filled and crazy with love. Crazy with a sense of brand new things, before it drowned itself in irony and cynicism and much worse — hate.

The sacred tree is vulnerable to these things. The sky is too. The smell of sweet wind and its patently lonely sounds focus the swirl of angst, the children of dread, bearing down on Dylan and his words of love and warning. So much has changed. So much is lost. Can I cling to the ancient mountain still as mine, as the seat of near-infinity?