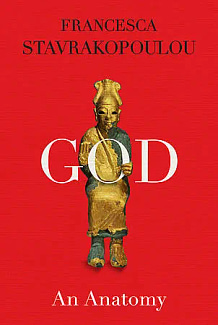 Francesca Stavrakopoulou, in her most recent book, God: an Anatomy, presents a vivid portrait of Yahweh, primarily as seen by his ancient devotees. She takes us on a journey throughout the Levant and Mesopotamia, covering thousands of years, multiple empires, and dozens of gods and goddesses. It’s rigorously researched throughout, and she (literally) gives us chapter and verse for each point along the way, using Akkadian, Babylonian, Assyrian, Persian, Greek, Roman, and Jewish texts and art to support her portrait.

The Yahweh of her book evolves over time, his body changes, his focus and activities shift. Starting out as a Canaanite storm god and fearsome warrior, a deity among many other deities, he’s usually depicted as a young god, but morphs over the centuries into a supreme being in his own right — from the son of El to the father god himself. His raw physicality seems to fade as the eras pass. He gets older, grayer, until he becomes almost an abstraction to later believers. After a series of major defeats and forced exile for the Israelites and Judahites, Yahweh, once the most ferocious of battle gods, seems to spend more time lashing out at his own followers than crushing his enemies.

Stavrakopoulou writes as if she is a believer too, but not of just one god or faith. She talks about the gods and goddesses of the Middle East and Levant as if they all have a central role to play, as if they’re all “real” to her. Her narrative suspension of disbelief is outright democratic at times, and she pulls no punches. When it fits the moment, she’s not averse to earthy, lusty, even crude descriptions or analyses.

Overheated, by Kate Aronoff, is a thoughtful, detailed look at Climate Change, the Environment, key actors fighting to protect the planet, and those seemingly at war against our one and only home. It is a condensed history of movements and counter-movements along the way, and of the present. She asks and tries to answer: How did we get here? And what do we need to do, going forward?

Aronoff’s book, like Stavrakopoulou’s, is extremely well-researched, with copious notes and a multitude of suggestions for further reading. To me, it’s a must-read for those concerned with the environment, and how the corporate world and our politics merge to impact the planet. But it’s not for the faint of heart. Despite presenting some excellent, hope-filled and doable solutions for our crises near the end, the facts and histories detailed can be depressing if read straight through, without a breath. I found it necessary to break up my reading, here and there, with music and walks in the sun.

Sea of Tranquility, by Emily St. John Mandel, is a novel about novelists, pandemics, the space/time continuum and its shady, self-appointed protectors. The story jumps back and forth between eras, starting in 1912, leaping into the 23rd century, jumping again into the 25th and back again. There are taboos in place against impacting the past, and they are broken. People are saved when saving them could radically upset the continuum. Time travel is naturalized in secret for the few, but not without dire consequences.

An author, perhaps a stand-in for St. John Mandel, responds to criticism of an earlier book, which is likely a double for the real author’s Station Eleven (2014). The criticism seems to be answered in the structure of the novel we’re reading, which is: too many open-ended strands to deal with. While I greatly enjoyed the novel, if it has a flaw, it’s that its loose ends are tied up a bit too neatly, though other readers may not see it that way. For this reader, those ties might work better in visual form, as a TV series. My guess is one is likely to follow after the successful recent adaptation of her earlier novel.