Watched the DVD last night. Very strong film, with a few flaws here and there. Ben Affleck does a nice job of directing his brother, keeping the film gritty and realistic and tied to Boston–to the people, culture and toughness of Dorchester specifically. 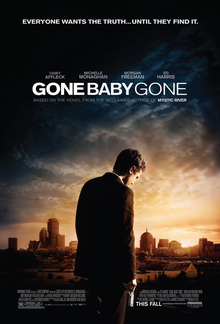 It’s a mystery/crime story about a kidnapping. A four-year-old girl is abducted and we quickly find out by whom. Or so we think. Casey Affleck plays a private detective, Patrick Kenzie, who is brought into the case with his girlfriend, Angie Gennaro, played by Michelle Monaghan. They try to assist the police, utilizing their first hand knowledge of the area and its residents, but this is not the sort of case they’re used to. Things quickly spiral out of control, and the little girl is given up for dead. But that’s not the end of the story or the search. It’s also the beginning of the real moral, ethical and philosophical heart of the film.

DVDs can add greatly to our sense of a movie. In this case, some of the deleted scenes give us important information regarding Angie’s motivations and why she chooses the side she chooses. We learn a bit about her mother, her upbringing, and things become clearer as a result. I think it was a mistake to leave that information out, as the movie shown in the theater makes it harder to understand why she and Patrick are at odds when it comes to the key ethical dilemma of the film.

It is still powerful, with or without the deleted scenes, and I’m still not sure exactly how Casey Affleck pulled off his key role. There are scenes in which you just can’t imagine an actor like him creating the drama he creates. Until you watch it, that is.

Amy Ryan was nominated for an Oscar for her role as Helene McCready, the mother of the abducted girl. She’s tremendously effective at getting us to question the end result. An obvious key to the success of it all. Just enough bad and good to make the viewer ambivalent, angry, sympathetic and outraged all at once. Just enough complexity of character to make it real.