Some quick comments upon further reading . . . 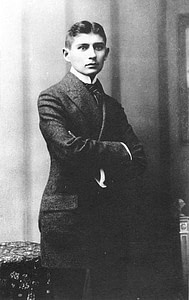 The author brings in Kafka’s own battle with his father, as I thought he would, discussing both his famous letter to his father and his short story, The Judgment. And he makes the connection work well between this and the family dramas of the rest of the Frankfurt school. But he adds a fascinating twist. Jeffries talks about Eric Fromm’s interest in Bachofen:

“As an adult, Fromm became steeped in the work of the nineteenth-century Swiss Lutheran jurist Johan Jacob Bachofen, whose 1861 book Mother Right and the Origins of Religion provided the first challenge to the prevailing orthodoxy that patriarchal society represented a natural state of affairs, and thereby validated capitalism, oppression and male hegemony, as Fromm’s biographer Lawrence Friedman argues. Reading Bachofen also encouraged Fromm to reflect that the mother-child bond was the root of social life and that in a matriarchal society there was no strife, conflict or even private property, reflections that were decisive for his developing socialist humanism. In Bachofen’s description of matriarchal societies they functioned as what Fromm called ‘primitive socialist democracies,’ in which sociability, generosity, tenderness, religiosity and egalitarianism prevailed.”

Moving from Bachofen to Max Weber, the author adds the Protestant Work Ethic to the mix, and from there poses an opposition of unconditional motherly love to conditional fatherly acceptance — and the matriarchal versus the patriarchal. The latter is at the heart of capitalism and the cause of the rebellion against the fathers.

To achieve that fatherly acceptance at that time meant continuing the previous generation’s business success, or at least the attainment of some other kind of widespread recognition. The father of the household almost merging with capitalism itself. The rejection of capitalism being a rejection of the father and so on. Which leads to this thought, not yet suggested in the book: What would have happened if women had led socialist revolutions instead of men? While it’s essentialist to believe yin and yang are that clear cut, and there are too many cases to count where gender lines blur, back and forth, both on the micro and macro levels, it’s at least interesting in a speculative sense to ponder the what ifs. Would the revolutions of 1789, 1830, 1848, 1871, 1917 and 1918 have turned out differently if women ran the show?

To be honest, I can’t see how they wouldn’t have, and, I’m guessing radically and for the better. But we’ll never be able to answer that, tragically.