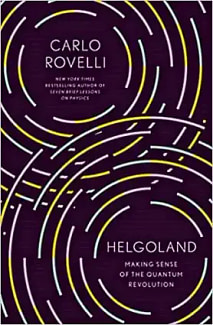 One could quip, “I must have missed that day,” when it comes to a subject or two during high school. Senior year, especially. I was absent physically more than was wise, and even when I did attend math and science classes, my thoughts were often somewhere else. With the sun, the waves, the girls on the beach, or some day-dream about heroic feats in sports, the arts, or racing old cars that had no business being on Thunder Road to begin with. Not unusual for a teen, I suppose — to think life is elsewhere. But there are limits to our wanderings, and contexts and timelines to consider, or so I’m told.

Centuries later, books lead to other books in rapid order, and the quantum world appears. Life is stunning in its minuteness, its colossal size and scope, its complex systems, great and small, and its paradoxes. It’s more than just relative. It’s relational, perspectival, and ironically uncertain to a point. We link therefore we are. We connect therefore we think. At its best, science interacts with us metaphorically and physically, and the best scientists are often visionaries, “artists” in their own way.

For me, the trio started with When we Cease to Understand the World, by Benjamín Labatut, which led to Uncertainty: Einstein, Heisenberg, Bohr, and the Struggle for the Soul of Science, by David Lindsey, which led to Helgoland, by Carlo Rovelli.

Short-listed for the International Booker Prize, Labatut’s brilliant novel was a revelation, as he burrowed further and further into the minds of troubled geniuses, sketched their epiphanies, uncovered their demons. Walking us through a century plus of science history, we learn again and again about the dark side of life-saving innovations, and the flip-side of flip-sides. But it was the battle between Einstein and Heisenberg/Bohr that interested me the most, its roots, its implications. Throw in Schrödinger and his cat, along with a host of essential role-players, and the relational and perspectival become nearly obvious.

The next two books are non-fiction, written by actual scientists, but for non-scientists, primarily. They both go deeper into Quantum Theory and further away from inner lives and personal demons. But those are still essential to each story. Lindsey and Rovelli are both adept at creating drama where one might think none could possibly exist, and it’s well-earned, supported, fact-based.

More on this special trio in the new year.