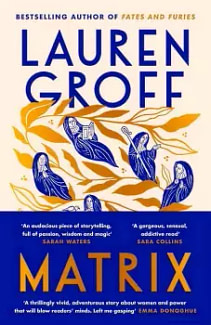 Mother, womb, mater, matrix. An environment for growing, developing, thriving. A special place, an original story, a lasting vision in which evolution is still possible, even likely. In this case, an abbey in medieval England, or an abbess in that ancient home, or the mind that creates the character with surreal visions of new worlds.

Lauren Groff’s Matrix is all these things and more.

Her heroine, Marie de France, was real, but we know little about her beyond her poetry and translations of classical fables. This gives the author ample room to play with sacred and profane elements to her heart’s content, buttressed by extensive knowledge of medieval England and France. Her Marie is a tower of strength with the will power needed to implement her visions. A titan every bit the match for Eleanor of Aquitaine, her kinswoman by marriage, her foil at times, and once, the object of her youthful love.

We first meet Marie at 17, cast off from the Angevin court, primarily due to her status as King’s bastard. She’s exiled to an impoverished abbey in England on the verge of collapse. Starving nuns, dwindling numbers, hopeless. After a brief time as compliant prioress-in-training, Marie takes full command, and radically alters the destiny of that abbey, against all odds. The story of the rise and rise of Marie de France, her spiritual daughters, and the creation of their labyrinthine home is beautifully told, with just a hint of archaic English to lead us willingly into another world.