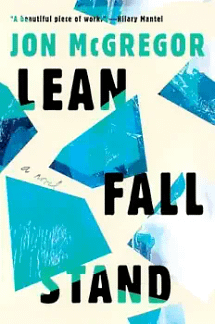 Aphasia. The Antarctic. The mystery of speech and the mind and the white noise between us, and how we recover from trauma, and how we never do. The hit and miss essence of working together to recover, or not. The small family dramas, the miscommunications between those with and without aphasia. The white noise and shattered ice thousands of miles away that never leaves us.

Sudden storms. Unbridgeable distances. The worst possible moment for things to go terribly wrong, and they do. Too far away from centers of rescue. Too far away, given their almost ancient conditions, even with modern technologies in place.

Told mostly in short sentences, McGregor shapes his prose to fit the catalyst of the story, to stay with that catalyst, to be a vehicle into and (almost) out of aphasia. Into and almost out of the ice and wind. He doesn’t just tell us about the gaps between thought and word, he shows us. He makes it into another main character, in effect. Robert, Anna, Luke, Thomas, Sara, Amira and Prose.

In Lean Fall Stand, Jon McGregor has crafted a beautiful and strange novel of profound loss, of life broken inside and out, of words lost perhaps forever, along with the truth. The truth of how and why and what this all could mean. The infinite distances, the wind and ice and snow we fight through, endlessly.