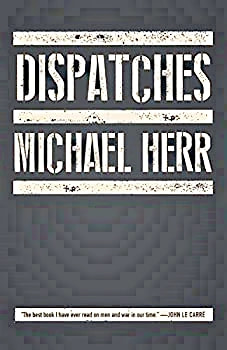 The development of slang and jargon. Being tuned into both. Having complete command of both. A way inside and a way to avoid. Everything. Everything you see and know to be utterly insane about your surroundings, your circumstances, but you’ve got the lingo down, and you navigate the slang, the alphabet soup, so it’s all cool.

This is how the opening pages of Michael Herr’s classic memoir of his time in Vietnam may strike the reader, for a moment or two, but there’s more. Much more. It’s beside the point, of course. And it’s essential as foundation for what follows. Navigation is all. Riding the crazed tiger, any way you can, is all.

Anecdotes, journal entries, and dialogues shape new stories of Vietnam. Dispatches (1977) is fantastic at cutting through the spin without preaching. Herr doesn’t need to. Spin or preach. War is hell, so he just lays it all out.

Books like this are always needed to remind us of that, especially when we still receive endless messages otherwise — from movies, games, governments, all of them bolstered by the understandable reluctance of combat veterans to ever describe the hell they endured. Asking them to relive their experiences is asking them to relive the insanity. But silence aids and abets each generation of lies in the wake of that silence.

You could die in a sudden bloodburning crunch as your chopper hit the ground like dead weight, you could fly apart so that your pieces would never be gathered, you could take one neat round in the lung and go out hearing only the bubble of the last few breaths, you could die in the last stage of malaria with that faint tapping in your ears, and that could happen to you after months of firefights and rockets and machine guns. Enough, too many, were saved for that, and you always hoped that no irony would attend your passing. You could end in a pit somewhere with a spike through you, everything stopped forever except for the one or two motions, purely involuntary, as though you could kick it all away and come back. You could fall down dead so that the medics would have to spend half an hour looking for the hole that killed you, getting more and more spooked as the search went on. You could be shot, mined, grenaded, rocketed, mortared, sniped at, blown up and away so that your leavings had to be dropped into a sagging poncho and carried to Graves Registration, that’s all she wrote. It was almost marvelous.

That last sentence, after all that comes before it, shows just how hard it is to leave old habits behind. Our conditioning is a killer, in myriad ways.

The book reminded me: It’s not enough to just ask, in any war, at any point in history, “What are we doing here? What purpose does it serve to send our young to kill or be killed by their young?” You also have to connect the dots of cause and effect that lead to atrocities committed by all sides. Yes, by all sides. What do people expect when soldiers are indoctrinated to hate “the enemy” so they can kill the enemy? Because if they don’t really hate them, they won’t kill them.

And so I thought: Despite what our media and all too many school books may teach us, humans generally think killing other humans is beyond the pale. For tens of thousands of years, that’s been a bridge too far for most of humanity, outside of sociopaths. So it takes exceptional levels of brainwashing to break us, en masse, of this instinct, this taboo against killing each other. War is essentially the repeated breaking of such taboos. When it came to Vietnam, a nation thousands of miles away, and absolutely no threat to us, the folks in charge knew the fastest way around that taboo was racism, cloaked and overt, with a dash of class war thrown in for good measure. A kind of reverse class warfare, which should be a tough nut to crack, but, hey, these guys obviously have our number.

There is nothing more insane than willingly going to war, which is yet another reason why Dispatches is so powerful. Herr, the journalist, like most of his peers, chose to go to Vietnam. He understood how appalling that choice seemed to so many of the soldiers he wrote about. He knew he and they were loathed (at times) because of that, because they were there in the midst of hell, and didn’t have to be. Most of the soldiers Herr wrote about had no other choice. That “no other choice” may have been an underlying factor in many of their actions, or just an excuse. The circle is ugly no matter how you look at it, and the abyss always returns your gaze.