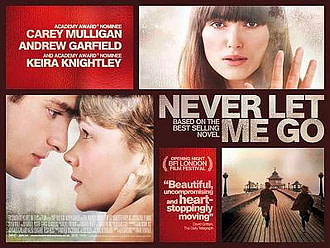 Directors can treat their audiences like adults or not. Treat them like they can follow a story without an endless setup, Cliff Notes or hand-holding. Director Mark Romanek does not hold hands. He drops you in a world and expects you to follow events as if this is all very normal, as if everything in that world is as it should be, without explanation.

And that’s the only way to tell this story, the one written originally by Kashuo Ishiguro. We’re dropped into his alternative Britain and we’re supposed to keep up and figure it all out for ourselves.

Romanek sticks to this template throughout the movie, and it makes the willing suspension of disbelief possible. Only one false note appeared for me: the coda. It’s the only place in the entire movie that the director loses his faith in the audience to process what has gone before, to see the poetry, tragedy and messages implicit in the images, words and colors on display.

But that one false step is minor, and does not undo the brilliance, subtlety and horror that came before. Basically, for me, it changes a nearly perfect film into one with a tiny flaw. In a sense, that flaw is in keeping with perhaps the central subject of the film: mortality.

Kathy H is the narrator, played with incredible grace and empathy by Carey Mulligan. She takes us back in time to her days at Hailsham, an elite boarding school for a very special kind of child. Just how special these children are becomes apparent soon enough, and we learn a terrible secret about British society in this alternative world along the way.

The central focus of the story is the love triangle involving Kathy H, Ruth and Tommy (played by Keira Knightley and Andrew Garfield, respectively). Through the drama of their changing relationships over time, marked by jealousy, betrayal and atonement, the audience follows this seemingly normal coming of age story that is anything but normal. The uncanny is everywhere, but nuanced and subtle enough to prevent real shocks. And that, too, is a part of the message. How we assume the sea we swim in is natural, as it should be, and not a tide we need to fight. How we take it for granted that our system is the only possible system, and always already deserving of our continued defense and support.

As with all good allegories, even Sci-Fi allegories, plausibility is often a key to its effect and effectiveness. In the case of “Never Let Me Go,” the plausibility of the story is never in doubt. We already have the technology to put much of it in place. What is in doubt, however, is the willingness of any society to go along with the kind of “farming techniques” employed in the film. The extremism of its methods are certainly not out of the ordinary, given our history and the ongoing acceleration of the gap between the haves and the have nots. But would we ever reach the point of accepting such a thing without question?

The film offers a warning and a chance to think long and hard about the human potential for selfishness and greed, and the deadly impact on others when selfishness and greed are normalized. When they become an institution both literally and metaphorically, what is our next step? What are we willing to do to prevent this institutionalization in the first place, and what can be done once it takes root?