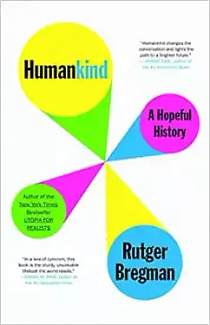 It shouldn’t come as any surprise that much of what we’ve been taught about “human nature” is nonsense. We’ve been told for far too long that we’re naturally selfish, greedy, and violent, and there’s just no point in trying to change the world around us. Suggest a better system, one structured to encourage cooperation, sharing, giving, and living in peace, and all too many cynics will laugh and instantly claim it can’t work — because, “human nature.”

Thing is, recent science tells us that our nature is very well suited for just such a society — one that utilizes our natural tendencies toward helping one another, sharing, cooperating, and preferring peace to war. Recent anthropology, archaeology, and other social and natural sciences have also shown that we humans survived to this point largely through cooperation, not competition, not “the survival of the fittest.”

Rutger Bregman, in his excellent Humankind, does a masterful job walking us through the experiments, news reports, and stories that have been used to paint a hopelessly negative vision of Homo Sapiens. He debunks them case by case, through close readings of the data and careful research. Many of the most famous examples, like the Stanford Prison and Milgram shock experiments, need surprisingly little effort to debunk. All it takes is looking at the notes from those who ran them, and a few interviews of the participants, to out them as mostly bogus and highly manipulated. The media portrayal of Kitty Genovese’s horrible death is also quickly dispatched with a simple look at police records, and a review of witness accounts. No, she didn’t die alone. One of her neighbors risked her life to try to save her from her attacker, but arrived just moments too late, then held her in her arms. And, yes, people in her building did call the police right away to try to help her.

Bregman’s section on the causes of Easter Island’s demise is also enlightening. In retrospect, the mistakes made by historians, scientists, and other scholars in that case seem amateurish at best. Too many forgot, for example, to read the actual Captain’s log from the first European encounter with its indigenous peoples, which actually speaks to their generosity, health, and friendliness. Instead, they just assumed that hearsay, many times removed from that record, was accurate. Others invented, out of thin air, a much larger population size (15,000) than was likely possible, and then concluded from semi-contemporary totals (3,000) that they must have slaughtered each other to get to that much reduced number.

Later in Humankind, Bregman looks into recent findings regarding the natural human aversion to killing one another, even in war time. I already knew about studies on “kill rates,” but Humankind deals with a much broader array of the evidence, including the fact that most guns at Gettysburg were never fired. The military, especially from Vietnam on, had to engage in systematic “training” to ensure that soldiers did shoot their enemies. I suspect few Americans know this.

Early in the book, Bregman echoes Brian Ware and Vanessa Woods, authors of Survival of the Friendliest (2020), when he takes up their variant on our name, “Homo puppy.” This fits us in so many ways, as Humankind shows. Several other recent readings, like The Social Instinct: How Cooperation Changed the World, by Nichola Raimani; The Goodness Paradox, by Richard Wrangham (2019); and Sapiens, by Yuval Noah Harari (2014), add weight to this science-based reevaluation. Bregman cites some of these authors as well. I wrote about Harari and his book back in 2015.

That said, Bregman doesn’t turn this into a lovefest, or paper over human atrocities and our all too frequent forays into the Dark Side. He just points to strong, contrary evidence that this is our “nature.” It’s not.

More on this important book later.