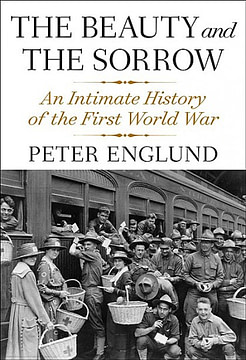 I’m about 50 pages into a new history of WWI. New for me, at least. It came out last year, and is by Peter Englund, a Swedish historian and journalist.

So far, what is most striking is the quality of the writing, its vividness and power, and not just the author’s. He’s selected twenty people from several different countries to tell the story of the Great War, in their own words, from their own point of view, as they lived it day to day.

In a sense, it’s like a good novel, shaped into a symphony of voices, democratic, diverse. In another, it’s like a cubist painting, simultaneous, flaunting its omnihood. Sometimes Englund quotes them at length, using their journals and letters. Other times he paraphrases their writings. And it makes me wonder: has our facility with language declined to the point that our novelists write about as well as the average, educated Joe or Jane from a century ago? Or is it just that the author chose people who wrote solid prose to begin with?

He did not choose famous people, or professional writers — at least that I’ve encountered so far. He chose a host of Leopold Blooms, mostly, everyday men and women, living through extraordinary moments, in an extraordinarily horrific time. But their words evoke the sights, sounds, smells and feelings of war, of exile, of bombs and makeshift hospitals and terror. Their words convey the fear and confusion that must always accompany war. This is a book of immediacy, full contact, not a bird’s eye view of things seen from a distance. We are right there on the ground, in the midst of things, but not in the trenches yet. I am waiting to see how he manages to hew the line he draws in his intro. A book about the Great War, but not about specific battles and geopolitics.

Humans have been through this so many times, world without end. It is good that we read about the lives of the so-called “common people” who suffer through these insane explosions of irrationality. If we heard nothing but the stage-managed cheer-leading from “official” sources, we might never grow to despise war. We might, instead, start them due to their supposedly high-voltage Romantic punch.