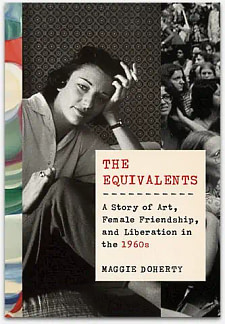 What was and is lost, and all the work we do to try to prevent this, or at least reduce the fallout from those losses. The things we don’t do to include all, and the ways we choose to exclude. Our choice, even if it’s just to go along with the status quo. These are among the most important takeaways (so far) from Maggie Doherty’s fine group bio of several extraordinary women from America’s past.

Radcliffe, Boston, San Francisco. The enormous pressures in the suburbs and the city to conform. Dilemmas, macro and micro, swamp the lives of would-be artists and scholars. They swamp everyone, of course, but artists and scholars are the subjects here. To make a home, or make art? To build a family, or pursue unfettered artistic expression? What if one could do it all? In the 1950s and early 1960s, that was still considered a radical idea.

In the first half of the book, Maggie Doherty describes the creation of the Radcliffe Institute for Advanced Study, and its profound impact on the members of its first class. She chooses five women in particular to focus on, but casts a wider net to embrace the cultural, economic and political context of the era. The poets Maxine Kumin and Anne Sexton, the fiction writer Tillie Olsen, the painter Barbara Swan, and the sculptor Marianna Pineda, get the lioness’s share of time, but Doherty is skilled at polyphony, so there is never a sense of cramped quarters here. She also gives the woman who came up with the idea for the new institute, Mary Ingraham Bunting, her due.

Below is a short clip that sets the table for the rest of the book:

A strong biography to this point, accessible, well-written. Reading this not long after Francesca Wade’s excellent Square Haunting makes for a worthy thematic sequel of sorts. More on the above when finished.