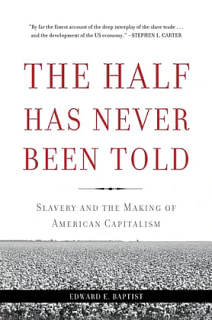 Just starting an important history book, The Half Has Never Been Told: Slavery and the Making of American Capitalism, by Edward E Baptist. It’s excellent so far, especially in bringing voices normally left out of histories to the fore: slaves. Their thoughts, their viewpoints. It’s admirable work by the author in putting that together, which can’t be easy, for obvious reasons.

Difficult reading so far. Not because it’s intellectually complex or loaded with jargon. This isn’t quantum physics, one scientist talking to another. It’s our historical reality and the flow of time that led to our current Now. It’s the horrific evolution of this nation and we need to know the complete, unvarnished truth, without hiding from it, ever, in any venue, in any school, in any institution, to prevent anything this monstrous from happening again.

That said, it’s difficult to take in. My mind is haunted by the voices on the page, and those swirling in my head as I read, the echoes of the silenced, because we were taught so much nonsense, whitewashed nonsense, at least my generation was. And the absence of the truth is a cancer in any nation, and it’s metastasizing in this one.

Still, none of this is really surprising, when you take a deep breath and contemplate the past, and that’s among the saddest things about this story. Even though the details, the vast interconnections, the way capitalism and slavery were inseparably linked, the way first the sugar crop, then tobacco, and then cotton became the vehicles of choice for white men using enslaved black and brown bodies, the way there is no rise of capitalism without slavery and the theft of Native lands, the way these twin evils tied disparate, far-flung cities together across oceans — all of this I knew already, but not in this kind of on-the-ground, right-there-with-them way. So it’s shocking, but no surprise. Appalling, but hiding, barely, underneath the underneath. Despicable, but reachable, if we ever searched for it behind the endless triumphalism, the constant cheerleading for myths and symbols that blind and comfort us.

Slave coffles. Easily one of the most reprehensible things ever created by humans. I’m in the midst of Baptist’s description of one such journey. Dozens of men, women and children, chained tightly, painfully together, forced-marched from Maryland and Virginia southward, to Georgia and who knows where else. Early 1800s. “Georgia-men” are buying up slaves from the older plantation systems of the Chesapeake. “Diffusion” is the new theory, the new excuse, the new way for Jefferson and other slaveholders to discuss the fate of Africans and African Americans in an almost clinical, “rational” manner that must have lulled most of their audience into missing how evil all of this was, especially coming from men who preached liberty and freedom — for some.

Running parallel with the reading, and ever present:

To make books like this one all the more essential, several states are currently pursuing (or have passed) legislative machinations to make this all go away, again, to make it illegal to even discuss in the classroom, and in the most Orwellian fashion, in the name of “free speech.” In so many ways, we haven’t learned a damn thing in 400 years.

It’s time to return to that journey. I’ll post more about the book in a few days . . .