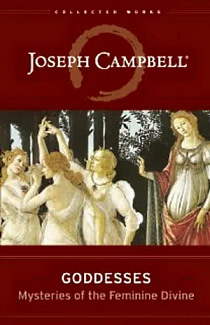 I’ve been reading Joseph Campbell since I was nine. He was foundational for me, along with Robert Graves, Lady Gregory, and Jane Harrison, sparking a greater love of world mythology, its roots, its scope and diversity. Going back to him as of late, I’m uncovering things I either forget about or missed entirely the first go round, and it has me rethinking more than a few things these days. Nearly halfway through his posthumously published book on goddesses, and I’m hooked again.

Goddesses (2013) is basically a collection of his lectures and talks between 1972 and 1986, with a focus on the Female Divine in myriad incarnations — Sumerian, Egyptian, Babylonian, Greek, Hindu — and a few mentions of its tragic, world-altering suppression along the way. Not in a political sense, necessarily. But in a historical, cultural sense through the ages. And by ages, when it comes to Campbell, we’re talking thousands of years, not generations, or even centuries, really.

Campbell gives a lot of credit to the scholar of ancient Europe, Marija Gimbutas, for the direction he takes in these lectures, and the editor, Safron Rossi, helpfully supplies several more avenues for further reading in the notes. He makes a good case, at least to me, that we should mourn the development and later dominance of religions which jettisoned the Feminine Divine in favor of a lone, patriarchal power — a radical change from earlier conquests which assimilated indigenous, goddess-centric religions. Contrary to received wisdom for much of the modern world, it really wasn’t a step toward greater sophistication, wisdom, progress, or even rationality, to move from polytheism to monotheism. In many ways, we took dark steps backward in time in the process, eliminating the essential, life-giving place in the divine order of one half the world’s population. Our conception of the heavens all too often guides our attempts to order the chaos on earth.

Campbell notes the difference, as well, of ancient religions that focused more on Nature and her powers, rather than the terminus of individuated gods and goddesses, especially a single god. With the former, we likely identify with those powers, with what the gods and goddesses represent. We may seek to be like them, or go beyond them to their sources, as we look beyond ourselves to help us see deeper within. And we may try to marshal those forces for ourselves and our tribe/community/land. We likely won’t see them as impossibly beyond us, forever, world without end. With the latter, with religions that make individual gods the final word and only door, we may try to create relationships with them, beg them for their help through the storm. But in the process we can also lose the belief that we, too, can marshal natural forces on our own behalf. Without them. Just us. We, in a sense, may become slaves to our belief that all power resides in the god, only in him.

As Campbell retells his myths, he laments the loss and the danger of taking religious stories too literally, as opposed to poetically, as metaphorically fertile. This is perhaps the heart of the matter. This inability to draw fruitful lessons and inspiration from stories, to keep in mind their fictional nature, choosing the path of literalness instead.

The severe limits this imposes, and the doors it shuts. Seeing fiction as fact, and fact as fiction, will all too often prevent us from understanding ourselves and our world. The absence of metaphors, and the skill to recognize them, creates waste lands.

More on Campbell in the next post. And more new paintings below: